you either hate them, or you deal with them. I don't know that there is anyone out there that loves them. OK, well maybe there is, but this woman hates bones. I am what other websites call a "skinless, boneless, chicken breast snob." And, I am proud to admit that, I guess. =) I have always wanted to be able to buy the $0.99 per pound split chicken breasts when they went on sale, but I just can't deal with the bone, or so I thought. I was reading one of the many recipe blogs I look at and she mentioned the chicken she was using was some she had cooked in the crock pot and frozen for future recipes. I thought, I wonder if I could do that with the bone in chicken and shred it and use it for other recipes later on. So, with BiLo having their split chicken breasts on sale for $0.99 a pound, I bought two packages (10 split chicken breasts) and tried it. I filled my crock pot up with about 2-3 inches of water, added salt and pepper and put 3 split chicken breasts in to cook on HI for most of the day. I would say approx 6 hours or so. The package I bought had 5 breasts in it, but my crock pot only held 3, so I boiled the other two. I put all the chicken in the fridge to cool overnight. The next morning I started to pull the chicken off the bone and shred it. I did the boiled chicken first, it wasn't as ideal as I had hoped, but i was getting a lot of chicken off of just one breast, so I was happy. Then I started on the ones I cooked in the crock pot, the bones literally fell off. IT WAS SO EASY!!! I was able to shred the chicken with my fingers instead of using a fork. I was so pleased!! I even got more meat off of these three breasts than the ones I had boiled on the stove. I froze the chicken and will be using it for other recipes like casseroles, enchiladas, pot pies, etc. in the future. So if you're like I was, and still am ( I will still only cook with boneless chicken breasts when it doesn't need to be shredded) I challenge you to try this. It was so cheap and it really was easy. Good luck!

Chicken shredded from one split chicken breast (This was actually from one I boiled, I actually got a little more from the ones I cooked in the crock pot.) 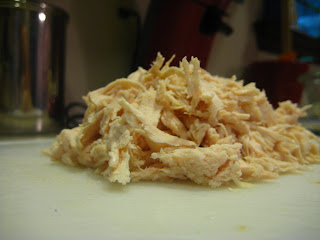 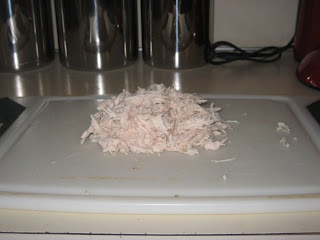 My mixing bowl filled 1/2 to 1 inch from the top with shredded chicken from 5 split chicken breasts. 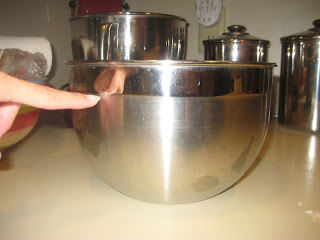 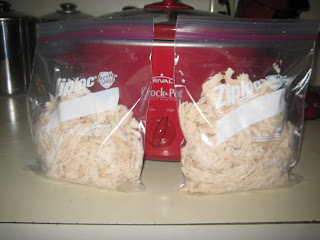 Posted by amber@This Mommy Cooks at 10:40 AM

I love this! Ever since I noticed Kroger and Schnuck's putting split breasts on sale for 0.97/lb once a month or so, I buy 4-5 packages at a time. I do the boiling thing with spices, carrots, celery, and onions, and I have my shredded chicken and chicken stock. My freezer is always full! I pull mine off as soon as it's cool enough - usually all just falls right off the bone.

Wow, Amber! This post was just for me. I don't do bones....I'll have to try this and let you know how it goes. I'm sure it would be a BIG money saver!

I am a fellow boneless skinless snob!! But I had a turning point when I decided to make shredding BBQ chicken sandwiches for my daughter's birthday party. Schnucks happened to have split breast on sale for .89/lb. So I bought 3 packs and cooked them all in the crockpot, it took me two days! But the result was great. Besides shredding I also boiled a pack and then diced it for other dishes besides shredded chicken. I heard you can fillet it off the bone but I haven't attempted that one yet!

I'm going to try the crock pot route, but question on boiling - how long do you boil them for? Thank you!

It usually depends on how much chicken you are boiling. I would say about 20-30 minutes. Just keep an eye on it. I probably cook it closer to 30 because I'm scared of undercooking chicken. You'll know it's done when the chicken starts comes off the bone easily, or the bones break easily. I usually cover the chicken as well. Hope this helps!

I just found your blog and added it to my favorites. I am always looking for recipe ideas!!!

Thanks for posting this :) I'm going to put some split chicken breasts in my crock pot now! I hate dealing with the bones and skin but I love pulled chicken. And they are sooo much cheaper than chicken breasts.

Chicken breast snob here! I've had to adjust my cooking toward what our food bank gives us and I've never cooked split breast chicken before, so I'm THRILLED to see your helpful info! Quick question ... I'm going to do the crock pot method; after I take it all off the bone, any suggestions on how I would turn that into a shredded BBQ chicken dinner? I'd love a recipe idea! Thanks.