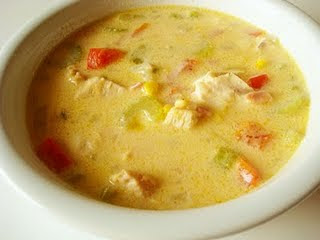 *Plan Ahead: This recipe calls for cooked chicken.

Place olive oil in a large pot over medium heat. Saute celery, bell pepper, onion and jalapeno until tender, about 5 minutes. Stir in the garlic and ham; cook for another 3 minutes. Whisk the broth with the flour in a liquid measuring cup or bowl and then stir into the soup. Stir in the corn and chicken. Bring to a low boil and reduce heat. Whisk together the cream cheese and milk in a large bowl until smooth (I had a difficult time getting my cream cheese to completely whisk into the milk so my soup had some minor small lumps but next time, I'll soften the cream cheese until almost melted in the microwave). Whisk the cream cheese/milk mixture into the soup along with the salt, pepper and cheddar cheese. Simmer on low until ready to serve.
Posted by Suzanne at 7:22 AM