Want to make ice cream, but don't want to buy an ice cream maker? I've got a recipe for you! I've really wanted to try making my own ice cream, but didn't want to purchase an ice cream maker I would only use a handful of times. When Melanie posted this recipe on her blog last week, I knew I had to try it. It looked super simple, which it is, and it looked just like regular ice cream you would buy at the store. This ice cream is delicious. It is creamy, not icy like some ice cream can tend to taste. I'm betting you could add different things to it to flavor it to your liking, but I'm not sure. And like I said, it is VERY easy. Absolutely anyone could make it, and then you can boast that you made it yourself! It is so good, and easy, that I'm planning on making up a couple of batches for my little one's birthday party on Saturday. This is one to try, definitely. Do it. And do it early, or you won't be able to have it for dessert after dinner. 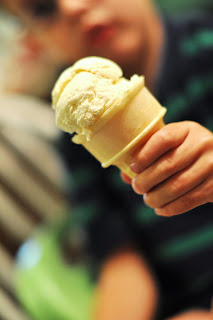 Magic Vanilla Ice Cream
from My Kitchen Cafe
*Makes 1 quart of ice cream
Ingredients:
1/2 cup sweetened condensed milk
1 ounce white chocolate chips (I used Nestle.)
1 tablespoon vanilla extract
pinch of salt
1/4 cup sour cream
1 1/4 cups cold heavy cream
Directions:
In a large microwave-safe bowl, microwave the sweetened condensed milk and the white chocolate until the chocolate melts, about 1 minute on 50% power. Stir. If the chocolate isn’t completely melted, microwave for 20 second intervals at 50% power until the mixture is combined. I have a small microwave and I had to continue microwaving it for awhile longer after the initial one minute. Set mixture aside and let it cool. When cooled, stir in the vanilla, salt and sour cream. Blend well. I used a whisk.
In another bowl, whip the heavy cream to soft peaks with an electric mixer on medium-high speed, about 2 minutes. Whisk 1/3 of the whipped cream into the white chocolate mixture, combine well. Using a rubber spatula, fold the rest of the whipped cream into the white chocolate gently until it is fully incorporated.
Place the mixture in an airtight container and freeze until firm, at least 6 hours or up to 2 weeks. If you are going to store the ice cream for several days before serving, press plastic wrap or wax paper directly on the surface of the ice cream before freezing it. I did use plastic wrap on the surface of the ice cream and it worked perfectly.
Posted by amber@This Mommy Cooks at 8:00 AM